Listen, love ain’t free. You and I both know it, so let’s stop beating round that sad old bush and face the facts, OK?

Even when you wistfully think, “hey, no strings attached,” you just know that you’re lying to yourself. There’s ALWAYS strings attached. If not in heart, then at the very least, in purse…

And sometimes in heart as well, sometimes even a heart filled with disappointment…

But for the masses, disappointment is a worn-out old suit. Ill-fitting, uncomfortable and an embarrassment. Especially when the purse beckons towards instant gratification, especially when disappointment can simply be turned into a jaunty lil’ jingle to help celebrate the sin…

But that’s just it – a blessed few get to realize their happiness ever-after, and the rest of us are simply relegated to dealing with the truth of the matter (most usually, only long after our purses have been drained of cash and fight) that eventually everyone has to pay, even Nimoy…

So Jen told us this week’s Twisted Mix-Tape Tuesday prompt was “No Strings Attached,” and I instantly gravitated towards prostitution. None too sure why, but I feel that Anita said it best, when she cooed that she had been through the “mill of love,” only to find every type but True. And maybe that in itself is the truth of the matter. I mean, at least when dealing with General Hooker’s women, you know that you’ll be broke by the end.

Oh, and speaking of Hooker’s women, here’s your bonus track for this week – I hope that you enjoy =)

After a long stretch, I’m finally jumping back in to bed with the kids of Master Class 2013 (No! Not like that…!), and I hope that Professor SAM is pleased enough to give me at least a passing grade for this long-overdue assignment… 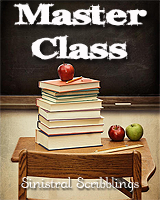 I woke up in bed with a man and a cat. Well, I suppose I could’ve also said “pussy,” but that would’ve given an entirely different spin to the story, you know? Besides, the cat was far too cool to be considered anything less, and the pussy wasn’t really all that bad as to warrant an insult.

What? Yeah, man, cat – both were men – one pretty generic, the other pretty cool. What I was doing in bed with them, was what I do in bed with all of them. I was making a living. A damned good one at that. Usually it’s strictly “one per,” but these two had some sorta weird “let’s fight over the boy” thing going on, and were willing to pay a helluva lot more for the “pleasure.” They’re all like that though, cattle. Show them less than a minute of absolute bliss, and they’ll come running back every time, cash in hand.

True, I don’t need the money. That’s not why I do it. And true, they won’t actually go to hell just for “bumping their bits” against me, but they think that they will. And that, my friends is all that’s needed. The sin isn’t breaking some predetermined law given down from “On High.” The sin is breaking the law as you see it, breaking the promise that you feel should be honored, but then don’t.

Big Daddy God is not cool with that. Trust me.

So these stupid fucks give me all their money, get their rocks off, and then condemn themselves to hell to boot! Pretty freaking sweet deal, if you ask me. Right?

What? No, none of them ever have figured out what I am. First off, they’re thinking with the wrong head when they’re with me. And quite honestly, I like to leave the horns at home when I go to work, anyway.

This week’s prompt is from Robert Heinlein’s “To Sail Beyond the Sunset,” and the song is – well – just what popped into my head as I wrote this, I suppose. Go figure.