Another walk, another mix tape.

Several years back Kelly, Kevin and I were having a conversation. Now right up front, I’ll let you know that those are their actual names. I had originally thought of using aliases, but quickly realized, that as none but one of you knows who I truly am, then none would know who they are either. Besides, the aliases I had chosen were just going to be “Kerry” and “Ken” at any rate. And if you knew me, you would then know that it was really them that I was speaking of. That, and I’m pretty sure Kevin would punch me if I ever called him Ken, aliasdentally or not. And speaking of Ken – errr – Kevin, he was with Kelly and I, clustered around a warm dinner and cold beers, chatting about 80’s music. Of course.

During the chat, both Kevin and myself were explaining how, back in the day, we had always felt a stronger pull towards “gay” music than that of the “straight” variety. When Kelly asked us to elaborate, she was surprised to hear that the gay culture had such a strong presence in music. Now, I’m not quite sure why she would be so shocked by this fact, but then again she IS from Missouri.

As I’m sure you guessed by now, in an effort to “educate” her, I was only too happy to take the opportunity to create yet another of my beloved “mix tape” CD’s. And if you’ve been reading along these past several weeks, you already know that the title of this one was “for me: The Gay-ties.” The rules of the mix were quite simple: each song had to be either written, sung or “taken in” by the gay community. In addition, each artist and track had to be devoid (well, as much as possible) of gay stereotypes (sorry B-52’s, that took you out of the running). And finally, the mix overall just had to be damned good. It starts off with a no-nonsense one-two knockout punch of Queen’s “Flash Gordon” and Frankie Goes To Hollywood’s “Two Tribes.” Chosen not so much because these were two gay icons of the eighties, but rather, because each song could almost be seen as a flag bearer to the generation.

These opening shots are followed by such powerhouse hits as – well, hell – I might as well just give up the track listing. Because, yeah, the mix is THAT damned good:

3. You Spin Me Right Round – Dead Or Alive

6. I Feel Love/Johnny Remember Me – Bronski Beat  with Marc Almond

11. We Don’t Have To Take Our Clothes Off – Jermaine Stewart

If you happen to have access to all these tracks, I suggest you make yourself a copy. If you don’t happen to, then drop me a line. We’ll get you hooked up. And yeah, to those of you in the know, I DID include Jermaine Stewart, AND he actually works pretty well in the mix. Even IF he never does get around to taking his clothes off. 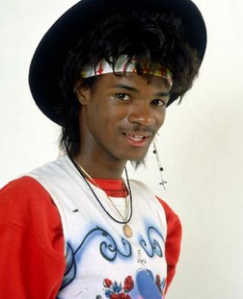 Sadly, the gay icon that loomed largest in my young life (BESIDES Liberace) doesn’t appear here. And that’s only because – while I love me some Judas Priest – there simply wasn’t one square inch of audio space that I could squeak Mr. Halford and friends into the remainder of the mix. Now, when I first created this, my daughter was young enough as to still think that I was simply the living end of musical knowledge, and a dance talent. As such, we spent many a day twirling around the living room gleefully to the final track. So much so in fact, that she swore that this would be the very song she’d use for the “father/daughter” dance at her wedding (my choice of Bobby Darin’s “18 Yellow Roses” being forcibly dismissed). This is sadly no longer the case however. And last time I checked, I believe we’re slated to stand toe to toe over some artist I’ve never heard of, who requires a voice modulator to sing, and in general is far less “raining menish” then I’d normally care for.

This mix has provided me with many more such plusses as well. For instance, it is the only “for me” in the series to give shout outs to three others for it’s creation (in addition to Kelly and Kevin, T-Bone – also a real name – is credited, as he came up with the title for the mix). However, possibly the coolest thing resulting from the Gay-ties disc (besides the kick assicles mix itself, of course) is that it was through its mention that I started the relationship with my Best Friend That I’ve Never Met; when we inadvertently “took over” a mutual friend’s facebook status for a spell. So even if the mix was total rot (and it is so NOT), then my efforts would still have been more than worthwhile.

Now, based on previous posts of this ilk, I’m sure you’re wondering what brand new window of knowledge was opened during my walk with the “Gay-ties” mix. What pray tell, did I learn this time whilst walking in a solitary fashion, to the beats of gay men and synthesizers? Not one damned thing. I just had me a nice brisk walk with some great tunes to push me along. I can tell you one thing though, of all the solitary walks I’ve taken as of late, this time I didn’t just hump along like a balding middle-aged schlep. This time, I walked Fabulous!

Today’s track was chosen over all the rest because it was one of the first-ever attempts by artists to bring awareness to the AID’s epidemic. Sadly, it was not heard by nearly enough, and ignored by even more.