Bravely yielding my six-string axe through a fiery inferno of hot rock and barely clad large breasted Amazonian women. All of whom are fighting amongst themselves, in a sweaty, hot, fornication-promising heap, over who will be the victor in having the honor of straddling my leg, as the nerd painter – decked in floods and flannel and dreams – creates my muscle-ripped mountain-top-commandeering portrait, replete with crotch-covering lion’s fur and a backdrop of gloomy and hard volcanic ejacu… Oh hell! I guest authored today on wicked cool Jen’s site, and here’s the wicked cool link to take you there.

Please pop on back and tell me what you thought about my wicked cool, Heavy Metal-doused diatribe!

In the final analysis, the 80’s were to see (2) distinctly different me’s (neither of which got laid, until damned near decade’s end) which is odd, considering that 2013 finds me in very much the same utterless boat.

But during the 80’s, 2013 was too far off, and much more about flying spaceships (and getting laid as a result) than anything else. So seeing as I had my tape recorder, and Snortin’ Norton with his “Mu-Mu-Mu-Metal Shopppp…!” Metal Shop broadcasting at midnights to help me along, we’ll just stick to what I knew back then, OK?

As has so often occurred, the decade began with me trying to “find my way.” And seeing as Liberace was considered far too “old folk” at the time, my way went a little something like this:

Now to be sure, “Hell Bent For Leather” was and is, my Priest jam of choice, but this comes in at a CLOSE second, AND unlike the former, it was 80’s as hell. So there.

Here was another “80’s as hell” ticket, on the metal front:

Now if I could, Dio would be my personal Metal Drag Momma, similar to Marian and k~ being my Blog Drag Momma’s (that’s right ladies, you’d be drag momma’s along with Ronnie James – pretty awesome, right?) But – with their perfect blend of speed, weight and nihilism – it would eventually be these boys, who were the ones to trip my metal ragings into full speed:

Which of course leads us to Maiden, as I can’t hear that last track without immediately thinking of possibly The BEST metal tune of all time. Yes, I mean that. Listen, and you’ll agree:

What? Everyone else does…

For #5, I will go to a cover – yet another in a long line of covers that bested the original by ten fold. Made by some poor kids hoping for a chance they never truly got, this lil dittie would go on to best the original, to the point where many would forget that there ever was one in the first – here’s the boys from Quiet Riot, doing it right:

Yes, from here I could also go on to regale you with tunes from acts such as Twisted Sister, Def Leppard, and any number of other metal and/or hair bands. But even in their midst, already a new troy was emerging, and the segway between the Metal me and the Next me, was coaxed (rather accidentally) along by strange new sounds like the following…

I didn’t get laid until damned near the decades end.

Coming in Pt 2 – the shit that would eventually make me what I am. Or what I was. Or what I might someday be… Or whatever 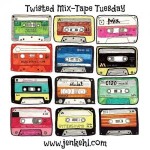 I hope you liked my entry for this week’s Twisted Mix Tape Tuesday. Please drop in and play along, because honestly, I could spend about a month’s worth of posts on the music of this decade; so your assistance in exploring the musical landscape of the time (sans any mention of Kenny G or Yanni of course) is appreciated!