It’s odd that, as a huge music snob (in stature versus size) I would not have known of this before, but when my friend recommended it to me, I just had to jump on board. I don’t know what it’s called in actuality, but the idea is to post on your social media weapon of choice a song a day for as many years as you’ve been alive, with enough such days allocated as to take you up to your actual birthday. I found out about the exercise 2 days prior to my day of birth, and jammed out all 47 tracks within that time, and through more than several cocktails.

Again, maybe I was wrong in this, but I had thought that you were supposed to, for each year represented, choose a song released within that year, only it if it said something about your life in that time. And that’s what I did. It wasn’t too long after that I realized I could write a little story for each song selection here as well. And that is exactly what I am doing now.

I hope you enjoy… 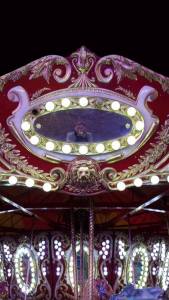 Story of his life, that lyric would end up being, but at that moment Teddy was far too young to know that. In fact, at that very moment, as the song lilted above the din of his mother’s prepping dinner, Teddy didn’t even know what the song’s story was about. The spinning wheel and painted pony he imagined were not connected at all, and in no way ever coagulated in his mind as the Ferris Wheel that everyone else surely would have envisioned.

He didn’t like the song for this reason. It confused him, and he loathed feeling confused, in part because it was a feeling he had far too often. He didn’t like the song, so he ignored it, opting instead to sit quietly at the kitchen table while he slowly rolled the slice of salami that served as his pre-dinner snack. The salami rolling was ritualistic, though if he ever took the time to determine what ever started it, he would have never come to an answer. It worked something like this: he would first fold each slice in half, secretly rejoicing in the grease that oozed onto his oft times dirt-stained fingers in the process. After folding thusly, he would then roll the slice into itself clockwise until it became a fattened cone shaped morsel. And, being highly anally attentive, he would then confirm that on the open end of the cone all the rolled layers of his creation were somewhat equal, without instances of too many dips or valleys between them. If the symmetry was not evenish, he would unroll disgustedly and start again. Only when it looked “just right” would he plunge his teeth greedily into the whole unholy mess, destroying his carefully crafted creation within two swift bites.

The damned song continued on. The deep, knowing baritone of the singer making Teddy feel even more inadequate in his adolescent confusion on the subject matter. He dismissed the sound again while methodically munching on his meat, imagining instead that he was able to make himself very small. Small enough in fact as to clamber under the same baseboard as the ants he had been observing doing so industriously at that moment. Once under there he imagined he would find a new world, one safe from harm. A world where he would matter, maybe even become king of the ants, or at least find others who also were like him, others who wouldn’t hurt him.

Teddy did this a lot, running away in his imagination to places where he mattered, places where he would fit in, and not get picked on or beat up. Places where he could be a king or a hero. Years later, Teddy would meet his Rosetta Stone of such diversionary tactics in a little remembered sci-fi movie he saw, wherein a lonely boy becomes a solitary star fighter that saves the universe. The whole entire universe; even the people that used to beat on him. And then, oh boy, are they ever sorry that they ever treated him that way!

But that would be a story for another time – a sadder, post-pubescent story, long after Teddy had become – rather against his will – Ted.

His mother jolted him from his reverie while saying, “Honey, you have to go and get cleaned up. Daddy will be home soon, and you know how he wants his dinner the minute he walks in. Now come on, off with you, scoot!” She shook her head, to herself wondering what had been going on in that little head of his this time, and why his look was always so serious and far off distant.

Leaving the table without complaint while smudging it’s laminate surface with greasy dirt, Teddy noticed that while the song had changed, it was the same band, now that other one, the one wherein the singer warbled, “you make me so, very happy…” Years later, Ted would be a Sometime DJ in an All-The-Time Clubland World, and he would firmly rail against ever playing the same band twice in a night, let alone literally in an amateurish back-to-back fashion like that. It may have even been this very experience that gave him the fodder to form this belief. But again, at that moment Teddy was far too young to know that. At that very moment in fact, Teddy didn’t even know what his song’s story was to be about.