i have a confession to make. i believe in angels, just not the kind that most people think of when bridging the subject. 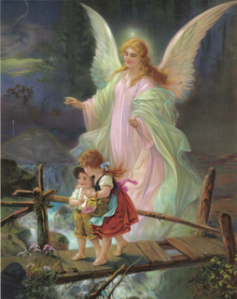 To me, the angels C. S. Lewis envisioned are much more probable than the popular variety. The type that are so far removed from us as we’ll never understand them – nor they us. The type that are so incredibly “other” as we’ll never truly be able to connect. What i mean, i suppose, is this: how could one being, who is thinking that there might be a God ever connect in any meaningful way with a being who not only knows that there is a God, but actually spends quite a bit of time with Him?

And how could we ever become one ourselves? An angel that is. i know that that’s become a popular idea used when describing the death of a loved one, especially when it’s a child. i also see it used quite frequently when a person (in my experience, usually a woman) is trying to describe their inner divinity or express their ability to overcome some hardship (but oddly enough, hardly ever in an effort to show any type of kinship or devotion to God). And i think this is kind of insulting to do so – to both the angels and us. i mean, i love C – adore her in fact (“Yes!  We get it already… move on with it, would ya???”) – but she will no more ever become an angel than my stupid, yet singularly beautiful, dog would have ever had a chance of becoming a human. Make sense? People can be beautiful people – but they can’t be angels as a result – much like dogs can only be man’s best friends precisely because they’re not men.

Here’s the tradeoff – the angels get to actually know that God exists, and they get to serve him. We, on the other hand, don’t know – supposedly – and as a result, get to choose whether we’ll serve or decline. Where that puts us in relationship to each other, i’m not quite sure. But i suppose if i was forced to come up with a (very weak and upside down) analogy, i guess you could say that the angels are very much like older children who know that the whole Santa thing is a scam, while humans are the younger ones who are still in the dark about the whole thing. In short, they know the truth of the matter, and we’re left guessing.

So, do older children take care of their younger siblings? Yes, but not always out of “love” per say, rather simply because “Dad said so”. And again, here is where my opinion of angels probably varies from the norm (but i believe i still have C.S. Lewis on my side, so there!). i’m of the idea that while the angels do help, it’s much more about their aiding God than us. And i don’t think the assistance they give – as an old commerical once proposed – is anything as simple as stopping that car from hitting us by throwing their angelic body in front of it instead (not to get off topic – whatever topic we’re actually on at any rate – but i don’t think their angelic bodies could even fit into our plane of existence, let alone stop a car). So, how do they help? i have no idea, but i’m pretty sure that whatever it is – had they their druthers – they’d much prefer not too. And i’m not being mean in saying that. i’m just thinking that if i were in heaven, i’d sure prefer to stay There than to have to come Here just to help out some former monkees who just never seem to get it right.

And since we’ve landed here quite unexpectedly, i might as well also add that while i believe in evolution, i refuse to say that humans were ever anything less than just that. Much like we’ll never be angels, we were also never primates. Oh, we might have looked the part when we first started out, and act the part still, but that doesn’t mean that we were ever anything else besides humans – monkey or otherwise. But there i go digressing again.

i did want to back up though, to a point i made earlier and incorrectly. i had mentioned that whereas the angels had to serve, we were able to choose. This was quite obviously worded wrong, when considering the idea of the “Fallen angels” (another concept i happen to buy into). What i should have actually said is that we both have the choice to serve – but what humans have also been gifted with is the very idea as to whether to believe or not. For the angels there is no choice, they see God. There is no belief, He’s right there. Probably stealing the comfy chair. As always. Humans however, can choose to either see him in that chair or not. We basically have the ability to tell him whether or not he exists. And he gave us this power. Again, as with so many of the ideas in this post, i have no earthly idea as to why he would do that, but there you go. As a human, i have the ability – nix that, the right – to look God square in the face and tell him he doesn’t exist. And then he won’t. For me at any rate. On the plus side, i then get to pretty much do whatever i want. On the minus side, when i die. i really die. And should i live on, i will need to go to the place where God is not. Simply because he doesn’t exist for me. Bummer.

“Wait, what did all that just now have to do with angels?”  Nothing i suppose, but i thought i might as well throw it in there. No need to waste a good pontifical session on only one subject.

Now, i know my family and a great number of friends would be quite upset if i left this topic without ever bridging the subject of the “Weeping Angels” of Dr. Who fame. And to this i must say that while it’s a really cool idea, it really has no merit. Especially when you consider that all they had to do to defeat this variety of angel was to give them a good and proper knocking over. On the other hand, i do sort of feel as if the angels portrayed in the show are somewhat closer to the real thing than we would like to think. They’re much more about “getting the job done” than all that fluffy, feel-good, “white sheet and blond bob” stuff we’d like to envision when we dream of angels. And they’re more about using their glorious power – power they obtain from God – for His good, rather than they are about throwing themselves in front of cars just to “serve us”. In short, much like my stupid, yet singularly beautiful dog, angels “serve” us only because they know that God exists, and while they may not understand it, they know that he loves us. They in turn, love him enough to get past all the reasons not to lend us a hand – and do. But as angels, there’s no way their going to fake being happy about it.

i have one last confession to make. i have always secretly wished i could be visited by an angel. i’ve believed and respected (and been jealous of) certain others who say they have – and while it sounds stupid – for me it would almost be like a sign that i somehow “counted” in some special way. And maybe, for just that reason, i’m also a little scared that someday my wish might come true.