Looking up, I realized that the sky was impossibly blue, which as a phrase, is an utter and bold-faced lie. I mean if it were an impossibility, then my eyes would’ve never been caressed by the hue that they were in the first. Turns out, the blue of the sky was quite possible after all, despite any negative terminology I used to describe it. 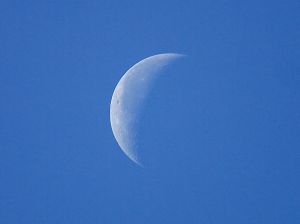 This of course, could call into question a couple of things. First off, the idea of just what’s possible. Besides men giving birth – or my ever understanding the lure of shows like “Jersey Shore” – I see damned little on the human level that is impossible, and yet we’ve not accomplished quite a bit due to the concept’s existence. Could it be that everything is possible, and we only throw the little “im” bit in at the beginning to ensure that we never have to make it so? I’m none to sure. And neither are you or anyone else. Because in a world of possibilities, we find ourselves constantly strapped down with phrases like “it just isn’t done that way,” “it’s never been done before,” “I can’t see why it would work,” and of course, “it’s impossible.”

Not that I’ve all the experience required to make this next statement, but I’ve never really observed anyone put forth the effort required on anything (besides my ever understanding the lure of shows like “Jersey Shore”) to actually validate the impossibility of something. Even in my own life, when I found myself sitting at the airport – weeping over the fact that stupid weather and union pussy regulations were keeping me from spending time with friends I haven’t seen in something like a hundred years – getting there wasn’t actually impossible, I just deemed it to be so after looking at the logistics of the thing. “Impossible,” I’m thinking is a snow job we allow ourselves to get suckered into, every time we feel we’re too weak, unworthy of, or just don’t give a damn about a particular possibility. We don’t care enough – or feel as if we can – make the world better, so we say that any effort to do so would be “impossible.”

Which then leads me to my second “thing,” the power of words. The idea that by simply saying something, it must be true. This is most prevelent in politics and religion of course (and yes you atheists, I talking about you as well), but it also washes across our daily lives. I’m constantly blown away that simple words have such power. It’s sort of like the power of money, in that something of no worth is given high esteem. Of course, unlike money, words can have worth, if spoken from the heart. But so often they’re not.

I’ve a friend who calls me both a music and a word whore. Right on both counts, although I feel better about my musical whoredom. You see, lyrics notwithstanding, with music all we can do is build. By its very nature, music uplifts, creates, caresses and provides us with more at the end than we had at the beginning. Words do very much the same, but they can also be used to the opposite affect as well. Words can destroy. Words can abuse. Words can be twisted so that they spread hate, all while appearing to be spreading love. Words can – and do – tear us apart from each other, build up barriers between classes, and provide those gifted in intellect – but not soul – with endless ammunition with which to destroy their opponents. In short, words are dangerous. But then again, anything we hold power over is.  The difference between a person yielding a hammer and another yielding a pen however is that while the one with the hammer can only clobber one opponent at a time, the one with the pen can literally wipe out an entire race with just one little stroke.

So, when one who is gifted with words says that something is impossible, most-to all of us will be inclined to believe them, without ever first giving it a go ourselves to see if they’re correct in their assessment. Again, the world suffers, simply because someone somewhere decided that the logistics of the matter were just too much effort to actually make the idea a reality.

As for me, I’m tired of “impossible,” whether it be the color of the sky, or something loftier. I’m tired of being told that this, that and the other thing cannot be done, because it simply isn’t done in that fashion. I’m no Punk Rock Warlord, but I agree with Joe Strummer that I am stuck in my mouse trail – and maybe even you in yours – and it will only be when we crawl out of our impossible little ruts, that the Possible will be realized.

Sorry Mr. Como, but while it was a close call, in the final analysis the boys from Carter USM beat out your “It’s Impossible.”