When I was a child, I remember occasionally have night frights that would awaken me, rigid with fear. I would then creep into my parents room, edging my way up to the corner of their bed, while looking intently at my dad’s chest. I would do so until I could confirm that it was rising and lowering with breath, and only then, would I be able to shake the fright and return to my bed.

A little over a week ago, I was reminded of this as I found myself doing very much the same. I stared intently at dad’s chest. This time not so much to confirm that he was breathing, but rather, because I knew it would only be a matter of time until he was not.

My dad was almost there. Almost home. And now he’s gone. His was a very small and private service, but he is a man who needs to be known of. A man I want to share with you. I was blessed to be chosen to provide the eulogy for his service, and after the worst bout of writer’s block I have ever faced, here is what I finally decided to say: 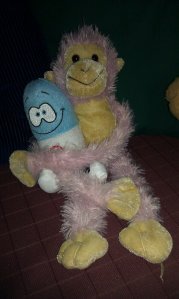 My dad was not a great man. My dad was a Good Man. Great men quite often happen by mistake. Good men, always happen on purpose.

A while back, when dad went to Roswell for the initial biopsy of his cancer, I found myself having an afternoon tour of the facility with my mom. A tour that ended – not surprisingly – at the gift shop.

Now as you all know, dad is very much a “walk it off” type of fella – never one to show you when he’s in pain. But I still could tell on that day that he was scared. As a result, mom and I decided to buy him the only thing worth buying in the entire place – a novelty stuffed “Happy Pill.”

Just one little stuffed toy that, each and every time you squeezed it, would laugh manically for what seemed like minutes on end.

As many of you have told me, dad was a strong-willed man. A fighter. Some might even add “a bit of a grump”. As such, this Happy Pill was the sort of present that I thought would actually bug him after an initial guffaw, but instead, he took to it immediately. For whatever reason, in this one silly toy, he found a joy that visibly lifted him above the fray of whatever was going on at the time.

With its frantic giggle, he was able to envision the world as it could be. The world that he often told his grandchildren should be. A world that would result if, as he said while taping a video for Roswell Park “you did your best, and you’re leaving back hopefully some good memories.”

Over the course of his cancer experience, I was able to hear that maniacal squeal from time to time, and it always made my heart glad when I did. Not because of the thing itself, but simply because of the peace I knew it allowed for my dad.

Sadly, as his condition worsened, the toy was left more and more alone, and though still ever present, wholly silent. As in the end, dad was still surrounded by love, but Joy and Peace had to momentarily step out of the room, to allow for his passing.

Dad is now free from his earthly bonds. Joy and Peace are once again his friends, worry and doubt, vanquished from his new life. I believe that he is with our brother Jesus – who is most likely even right now asking him to stop gassing up the joint.

And dad’s Happy Pill? Well thanks to mom, it now resides with me. Now, I know that we will all remember my dad in our own way. But for me, I plan on making that silly little toy laugh in remembrance of him, a strong willed man, a Good man who – for at least a brief spell – saw the world as it could be. And as the memories he left behind are many, and good, I plan on doing so often.

And I will start today.