She sat there, munching somewhat sloppily on her burger, occasionally spitting forth bits of it as she yelped out to no one in particular. And I sat there and stared. And I felt bad. I felt bad that I was staring, but I wasn’t doing so out of rudeness. No, it was more envy that I felt than superiority. It was more a case of “what if” than of “thank God not.” And here’s why.

Whenever I stumble across one who is severely mentally handicapped, I become somewhat immersed in what I imagine is their imprisonment. Their imprisonment in a world who wishes they just weren’t around. Or at least, not quite so visible. But at the same time, I find that I am jealous of their freedom. Freedom from a world that regrets them so.
A world, mind you, that is far more handicapped at times then they will ever be. A world filled with folk who care more about little dollar bills than we do each other. A world that places much more emphasis on the cut of the cloth than on the content of the character. A world that hopes for a cure to all disease, mental retardation included, but only partially for the benefit of those who suffer from it. And only at the turn of a profit.

In my very humble opinion, this world isn’t nearly good enough for people such as her. Or us, for that matter. This world is a damned and empty shadow of what it could be, and I feel that we’ve all worked pretty hard to make it so. Or at the very least, sat back and simply let it happen.

So what of that poor girl-woman that suffered my “not intentionally rude, but extremely rude nonetheless” stares? Why do I sometimes feel jealousy towards people of her kind? How could I be so mean as to even make mention of the concept? Well, imprisoned as she appears, I would love to see the world through her eyes, just once. Just once to see if what I think to be true, actually is. You see, I’m of the belief that her vision is much clearer than mine. I’m quite sure, in fact, that mine is muddled beyond the point of ever recognizing the Truth. A Truth that I believe she most likely sees naturally on a daily basis. A Truth that she may even long to share with the rest of us, if only we weren’t so ignorant to the language.

She sees the Truth, and I see only what I choose to see. And yet she is locked in the wheeled chair, while I roam free… 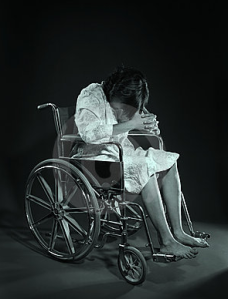 I suppose I should step back for a moment and let you know where my meanderings and ideas on the subject come from. I have no personal experience in my own family, but when I was a young boy, I was forced (yes, I mean the word – or at least did at the time) to volunteer at an institution that cared for people with severe mental and physical retardation. My parents, as teachers our church to those who were preparing for the Sacrament of Confirmation, felt it was important to teach the children about stewardship (oddly, a belief of theirs that has all but vanished in their later years. A possible topic for a different time). Part of their education to this end included a trip to a local long-term care center that managed the severest cases. As parents who also trusted not another living being on the planet, my brothers and I toddled along as well, even though we were not yet in the Confirmation program. As a young and unappreciative pisser, I recall hating the place when we first arrived. The stark white walls did nothing to conceal the smell of piss and medicine. The painted-over drop ceiling served more to rebound, than muffle, the occasional non-sensical shout or yelp. The halls were clogged with wheel chairs, and in each, sat an alien life form. A being so far removed from my little pisser knowledge of the world as to be almost comical, if it (again, word usage intentional) didn’t frighten me so. Being young, and being a pisser, and being there against my will, I decided that hatred would be my best response. Hatred towards these creatures. Hatred towards their needing my assistance. Hatred towards their being around at all. I did as I was told, but only just. How dare they make me? How dare they be here? How dare they exist?

And then, as happens so often in life, something happened. And that something was this. One of them began wailing. And not just a whimper or a sob, but an honest-to-Jesus moon-raising moan. One that would make you think they weren’t just seeing a ghost, but the never-welcome Mr. Beez L. Bub himself. And for all I know, maybe they were seeing exactly that. The wailing only made me feel uncomfortable. Scared. But to another, it provoked a different reaction. I can’t recall if it was an employee, a volunteer, a random passer-by or even maybe an angel in disguise. But I do remember one soul, walking deliberately up to the young wheelchair entrapped wailer, and hugging them. Simply hugging them. The wails continued, but so did the hug. And eventually both were quietly put to rest. Both the hugger and the wailer were at peace. I stood there dumbfounded as the blinds were torn from my eyes, my little stupid pisser attitude backhanded to the floor.

I could physically feel myself growing up a little bit that day. One of the first of many times I’ve had the experience. 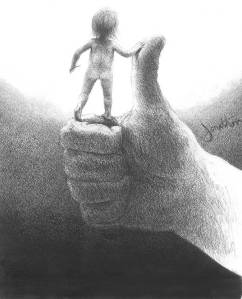 A little while later I was pushing along one of the more talkative residents who would speak and speak and speak, and occasionally even say something. At one point he looked me dead in the eye, and with no prompt or reason whatsoever, he told me very confidentially the exact day it would start snowing and the exact amount – in quarter inches – that we would receive. I’m sure you already know by now that I’m going to tell you he was exactly correct on both counts. EXACTLY. Dumb luck? Could’ve been. Dumb luck does seem to have a way of getting around. But me being me, I’d like to think that there’s something more to it. In fact, I’d like to think that maybe – just maybe – there are certain people who are so spiritually in-tuned, so close to God, that they’re incapable of dealing with our little shambles of a “reality.” They’re exalted over the angels, but trapped on this mortal plain, and they simply can’t function at such a junior level. They need our help in this world, but only because we’ll need theirs in the next. We just don’t know it yet. They’re not “retarded”, we are. They are advanced to a higher prominence, and we sit smugly by and laugh at their superiority.

I know, it sounds a little too “pie in the sky” to be true. And that, in part, is one of the reasons I wanted to jump into my lunch mate’s head. Just once I really would like to see if I’m right. Or if I’m an idiot. Or both. It’ll never happen of course. For one thing, we don’t live in a Disney movie, and swaps of this nature just aren’t possible. But even if they were, I don’t feel the trade would be a very fair one. For her, that is.

I feel it’s important to note, I’m using this song today not in jest, but rather, in praise.  I too, long for the day when all of us “sane men” are locked away, and we allow the “mad” ones to finally be free.

4 thoughts on “All the sad men, roaming free”