OK, here’s what I said. I said “I love these pics – as I love looking at the treetops as well. For me, they always have been the place where the earth touches the sky. The place where birds perch, mocking those of us who only wish we could fly.”

And here’s what she said in response. She said “Hey t, I trust that “Writer’s Block,” will break free any minute now. Thanks for stopping and for the comment. Onward and Upward. :)”

And would you believe, she was right!

As I drove home, I stopped staring at bumper stickers, and looked upwards instead to the spiny dead trees, softly scratching at the surface of the sky. Tickling it’s soft underside until the firmament almost giggled itself into a warmer shade of blue. Now don’t get me wrong, I also kept my eye on the road (you can’t say I haven’t learned anything from Jesus). But whereas a normal day would have found me ruminating about any number of things earthern-bound, I found my mind focused instead on the tree tops, stiffly swaying this way and that. I focused on them, and on how blessed they are to be able to “touch” the heavens as they do. 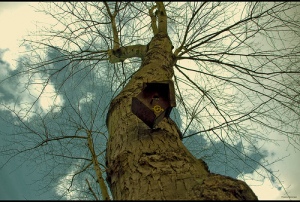 “But t, trees are hardly the tallest things we have, and barely do they touch the sky at all, by comparison.” True, but of all the monoliths upward bound, the trees are the bees knees – The wha..? – OK, I have no idea what I meant by that just now, but I felt driven to write it. It just seemed so right. Heck, I’m even gonna go back and read it again – hold on for a second – OK, I’m back. Digressions aside, instead of writing what I wrote, what I was actually going to make mention of was this: yes, the buildings climb higher than the trees. But these are of man, and as such, inherently corrupt. They do more to pierce the sky than tickle it. They thrust upward in function alone, invading and taking over, instead of peacibly coexisting. In short, they are rude and oversized phallic symbols, trying veinly to impregnate the sky with Man’s pride. Mountains too, reach much higher than the trees. But they reach so high as to no longer be visible to one so small as myself. In fact, in many cases they reach heights as to pass through the sky altogether, thus ruining the illusion in the process. So, of all the monoliths, I lean towards the trees when sky-dreaming, simply because they are the least inclined to act like monoliths in the first. Never mind the fact that lying on a soft blanket of grass, while sky gazing under a tree, is far more comfortable than laying on the sidewalk outside your local skyscraper and doing the same. 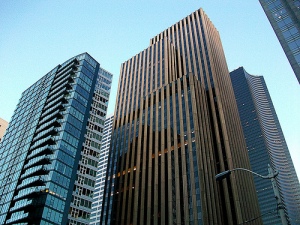 Within the trees you can find the animal that I am most jealous of, and for the purpose of today’s post, that animal is the bird. If I were feeling particularly base right now, I would insert a joke here implying that my jealousy revolved around the birds ability to publicly defecate anywhere, and without breaking stride. But seeing as I’m not feeling particularly base right now, I will refrain from making mention of any such thing. Instead, I will simply let you know that it’s not so much the bird I’m jealous of, as it is his power of flight. Flight. Can you imagine it? Flight without devices, or jets, or gizmos of any kind being required. Flight whenever desired, and for as long as as well. Flight, by simply spreading your wings and setting sail. Now, that’s for me Jack! I know that in order to have this power, I would also require hollow bones, a development that wouldn’t necessarily be to my advantage at the next bar fight. But let’s be honest, I can’t imagine I’m going to encounter any of those any time soon, so I’m willing to make the trade. Of course if C were here right now, she would also make mention of the fact that with hollow bones, my blogging days would be over as well, seeing as I’m a very aggressive hunter-pecker. My poor keyboard simply weeps every time I sit before it. Crying over the bruises that it will have to endure, as a result of the one thousand plus words I’m getting ready to inflict upon the blogosphere for that day. One brutally punched key at a time. Of course, if I could fly, I’m none to sure that my state of bloglessness would bother me too much. I’m of the belief I’d take flight over type to cure what ails me, open air over written word to set myself free. As I’m pretty sure the percentage regarding incidents of accidental bug consumption is about the same for either task, I’m thinking the power of flight would be a clear winner. Seeing as it’s a theory I’ll never be able to test, I fear you’re simply going to have to resolve yourselves to being stuck with me. But don’t feel too bad, at least you’re not my poor keyboard.

So, I am a grounded human who can not fly. One who is more rooted than the tree, simply by having the knowledge of my roots, the awareness of my chains. But unlike the trees, and the birds that rest upon them, I can dream. I can dream of tickling the sky while I fly across it. I can envision the world beneath me, and I can enjoy my vision. The tree may very well touch the sky. But it never knows that it does. And the bird may very well drop a bomb on the car of the biggest, richest Pisser ever, but it feels no righteous satisfaction in it’s action. Oh no, wait. That was going to be my “feeling particularly base” response. What I meant to say was this: the bird can simply take wing whenever it wants, but instead it is locked into so doing only when instinct mandates it. Of the three of us, it is only I who am truly free. Of the three, it is only I who will ever be able to suffer writers block, and be glad of the experience. I am neither the flying Prince nor the sky-tickling Old Lady Shade. I am rather, and possibly more importantly, the little child who can one day rise higher than them both.

6 thoughts on “Neither the Prince nor Old Lady Shade”